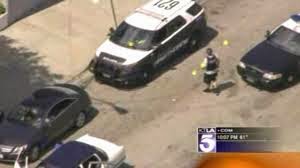 Man kills woman, injures son after they laughed at him, police say.
A gunman shot and killed a woman in front of her 12-year-old son after the pair laughed at him, officials said.
Hawthorne police immediately shot and killed the gunman.
Denise Berry was driving in Hawthorne with her son about 12:40 p.m. Wednesday when he pointed out that the man's feet were hanging out of the window of a Cadillac and said “that’s kind of funny,” said Lt. Dave Coleman of the Los Angeles County Sheriff’s Department.
The mother and son shared a chuckle. At some point, the boy made eye contact with the shooter.
“That’s not a reason to go out and murder someone,” Coleman told The Times.


The Cadillac followed Berry’s Mercedes-Benz until she spotted a Hawthorne police officer in the 14200 block of Kornblum Avenue, according to the Sheriff’s Department.
Security cameras installation los angeles.
Posted by dsmlacctv at 07:11